Brokerages, the new SEC Rule, and a Podcast

Now that the SEC followed through with their rule 15c2-11 change blocking quotes from non-reporting companies, the brokerages are all backing away.  I don't know if the SEC realized this would happen but it seems like every online brokerage company's response is to just take their ball and go home.

In recent weeks we've seen announcements from Schwab, TDAmeritrade, and others saying they will not allow clients to purchase non-reporting stocks after August 2021.  Unfortunately I don't know of a single online brokerage that will let you buy dark stocks after the rule change goes into effect in Sept 2021.

I was a guest on The Investor's Roundtable the other day to discuss this topic.  You can hear the audio here and watch video here.  Give it a listen to hear my own opinion as well as some others I really respect.  I have to say it was a real trip to be on a panel with my hero Dave Waters of OTC Adventures / Alluvial Capital.

You can see the full Schwab statement here and I've attached screenshots to the end of this post.  TDAmeritrade says the same thing which makes sense given their merger.  They will not allow any more buys of anything not listed as current on OTCMarkets.  No stop signs, no grey market, no caveat emptor.  At least we can still buy the yield sign Pink Limited Information tier stocks so there's that.  In all, Schwab is turning off the lights on ~6-7k stocks when you combine this with the Caveat Emptor announcement from earlier this year.  It's so sad.

I've run into similar issues with brokerages before and 5 years ago I contacted every brokerage I could find to see who would let me buy these types of stocks and who would allow an account transfer containing these stocks.  You can see the results here and there were only a handful even at that time.  My plan now is to ask around again, starting with those brokerages who did not give me an explicit no last time.  But with all the uncertainty right now I'd bet I have to wait until Oct to get a real answer.

As of right now I know T Rowe Price will still allow purchases of dark and caveat emptor stocks but I've heard they will not after Sept.  I have been told Canadian brokerages will allow purchases right now but I haven't confirmed myself.  I know at least some full service brokers operating through Pershing, like Odean, will allow customers to buy anything still, but I don't know what they'll do come Sept.

The basic change coming from this SEC rule change is no brokerage is allowed to provide bid/ask quotes for any non-reporting stocks.  In response, OTCmarkets has put in an SEC proposal to move all these dark stocks onto their Expert Market where they would provide quotes and qualified investors could trade.  So far the SEC has not responded to the OTCmarkets proposal which is messed up since the rule goes into effect in a matter of weeks.  When I've asked brokerages about this they can't even respond because it's not a real thing yet.

I think we will have a way to trade these stocks at some point, '"m just not clear on what that will entail.  It may require higher commission payments.  I may have to *gasp* pick up the phone to call in trades.  It may not be available for some time after Schwab blocks me from buying dark stocks.  I really don't know but I think capitalism will find a way.

So the question is what can you do about it.  Bitching and moaning is fun but gets us no where so what I suggest is two fold:

So pasted below is my comment letter to the SEC.  You can see them all here.  If you want to comment then you just have to send an email to rule-comments@sec.gov with the file number S7-23-20 in the subject. My past attempts to influence the SEC have borne no fruit but I have to try again. If you want something you must fight for it. 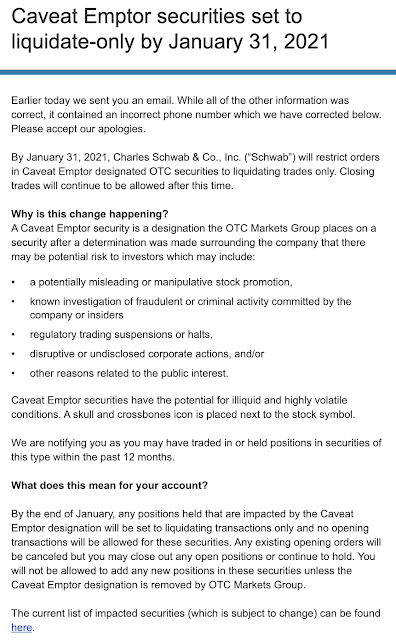