IVRO You Can Taste the Potential

Sometimes a stock just looks so good you have to buy.  InVitro International (IVRO) is tiny, profitable, and debt free.  The stock sits at a low after falling from a big rise.

When assessing potential you have to start with the business.  I don't go that deep with relative competitive analysis or anything but with a quick glance you can at least know whether you have a melting ice cube.  IVRO is looking to the future.  They are pushing the world towards non-animal based testing.  Making products that allow development of lotions and cosmetics without involving animals.  I believe in the mission and find it hard to believe the world would not move in this direction.  A few quotes from the most recent annual:

The Company is a pioneer in the field of non-animal testing and was first to develop and commercialize its flagship product Corrositex® in 1991. The global regulatory bodies that govern non-animal testing did not exist at the time. These regulatory bodies started to evolve in early 2000’s and then consolidated into a more robust global regulatory system in the last few years. Organization for Economic Co-operation and Development (OECD) is the foremost such regulatory body today, with 37 member countries, including the US, and covers more than 80% of the world of commerce.

In 2014, Corrositex® was adopted by OECD, with the publication of Test Guideline (TG) 435. Following this regulatory approval, Corrositex®, became Global Harmonization System (GHS) accepted as a full replacement for animal test results virtually everywhere in the world of commerce. The OECD/European Centre for the Validation of Alternative Methods (ECVAM), Transport Canada, U.S. DOT, EPA, OSHA, Consumer Product Safety Commission, FDA, and the International Air Transport Authority (IATA) all have accepted Corrositex® as an alternative as well.

Each of the above mentioned Regulatory Advancements are the result of many years in a strategic alliance with INT.E.G.RA in Italy. The Company partnership sells and distributes both laboratory test results and kits in Italy and several European markets. In addition, the partnership coordinates and facilitates regulatory approvals and acceptances from authorities and agencies within the OECD. The Company has over a dozen testing laboratory partnerships globally to help commercialize its technology.

Now to some numbers.  My favorite thing about IVRO is how small and tight it is.  In the market's opinion, a lot of houses are worth more.
That sounds like something I want to own right there.  Priced a little under book and just over revenue.  Profitable in an industry with the wind at their back.  Take out the cash and you get a business for free.
Which brings us back to the business.  I know what you're thinking, if this is so great why is is priced like nothing?  Those quotes above say the company has been at it for 30 years so why buy in now if all we have done so far is grow revenue to the unimpressive level of one million dollars.  I feel like the ice cream shop down the street might take in more.
But your job as a stock analyst is to look to the future.  Find the change and spot the inflection point.  I am forever looking for change.
Some recent activity:
You can see the trajectory in the bullet points above and chart below.  Look at the stock price respond to increased communication.  The excitement built then the top blew off.  I didn't sell and have bought more in those big volume days down here around a nickel.  Maybe I should've sold but I feel like this company's best days are in front of us. 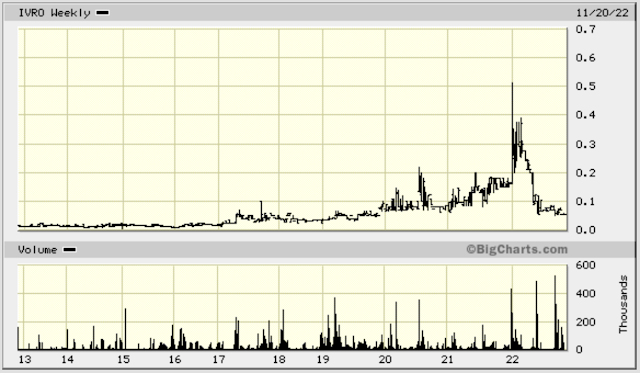 The CEO of 23 years, who owns 12%, had a change of heart.  He started putting out press releases then he stepped aside and split up his duties to bring the company to a new level.  They are acting like a real public company now that actually cares about growth and shareholders.  What a crazy thought!
The most recent announcement about buying a lab is super exciting to me.  I mean I don't know any more than the press release which stated the lab is profitable but at least they are trying.  They are growing and  becoming integrated.  Doing something with the cash they've built up.  IVRO is looking for more.  I want to see where they go with this.
And look back at those comments from the company on the political situation.  The world is moving away from animal based testing.  How can we not?
Change is what makes money in the stock market.  You are looking it in the face.