A few days ago DYSL put out a tender offer to buy back 54% of their common at $2.49.  I first wrote up the stock at $0.81 and my portfolio has been ugly recently so it feels great to have a win.

I'm not sure yet what to do so let's run through some scenarios.

First a chart because it tells the full story.  You can see the stock rise in 2013 as the public started to believe in the potential of DYSL's Xcede product.  It never took off and you can see the disappointment in late 2018 as the company closed up the division.  Volume disappears as the company de-registered from the SEC in the fall of 2019, going dark and vanishing from the public eye.  The company continued to send annual reports to shareholders and hence the sudden rise in late 2021 when a record year and subsidiary sale was reported. 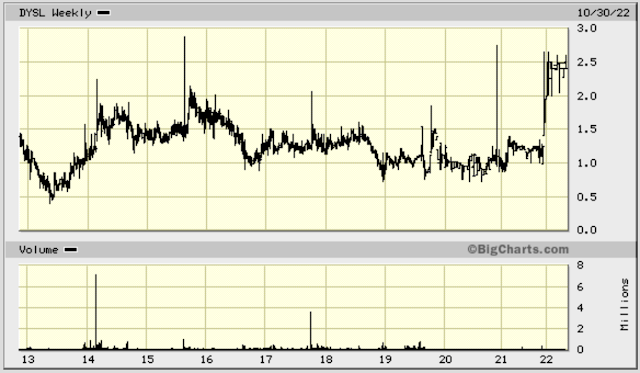 For the 9 months prior, the stock was flat at ~$1.25 giving a market cap of $18.5m.  Then they reported $6.3m in operating income and sold 2 divisions for $32m!  Talk about a blowout.  I don't think those divisions were even half their revenue.

In each of my first two writeups I said the stock was worth at least $2 and all along that has been my thinking, so from that point of view I should take the money and run.  But we have a couple weeks to think it over so let me check in a little closer.

One way to look at this is value the shares based on most recent numbers assuming the offer is completed.  In the tender they geve the most recent 9 months numbers plus a balance sheet so we can use that.  There's $28m in cash and DYSL is about to spend $20.5m on a tender so let's say they have $5m excess cash.  For a valuation let's say I normalize the 9mo earnings and give it a 10 PE, that makes ~$12m and we add the 5m excess cash.  Let's add a few million for the real estate I think they have left and we get $20m for the company = $2.94 per share given the 6.8m shares after the tender completes. 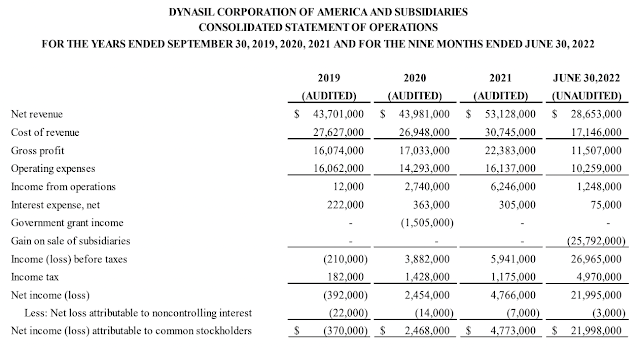 We could also take the balance sheet and just assume book value which is $44.4m.  Divide by the current share count of 14.8m shares and we get a value of $3 per share.

The final valuation method I have in me here is to base on the projections given in the tender.  Looks like they predict a fairly stagnant company so I'll just go with $1.5m net income * 10 = $15m for the company = $2.20 per share with our future 6.8m shares out.  Or if you say 1x sales that'd be more like $5 per share.

So those are my estimates and it sounds like the $2.49 is not all that far off, though I could see it being a bit higher.  Maybe I should just take it and move on.  But I'm always thinking about the future and what if.  I try to understand the motivation of all players involved.

On the one hand we have what seems like a decent price with the stock at a 10 year high.  The CEO is 71 now and owns about a quarter of the company, maybe this is him saying goodbye.  Unfortunately the tender offer does not say what the insiders who own 54% of the company intend to do.  The stock is on the expert market so liquidity is nothing and it's hard to say when the next chance to get out might be.

But what about that sale of 2 divisions for $32m?  That sounds pretty crazy for an $18.5m market cap stock.  What if the whole company were worth that multiple?

Below are some numbers since 2016 and a description of the divisions vs their reported segments.  When submitting 10k's, the company used to break out divisional performance.  They had 4 Optics divisions which you can imagine what they do, and one Innovation & Development (RMD) which was mostly a group of research brains for hire.  Revenue was about evenly split between the two reporting segments with gross margin a bit higher for RMD than optics.

They sold 2 of their 4 optics divisions, which as a whole had historically lower margins than RMD, for almost twice the market cap of the whole company!

Unfortunately they never split out the individual optics divisions in reports so I don't know how much revenue was in the sold divisions Optometrics and EMF.  When in doubt take a guess and so here we go.  What I want to know are the margins and revenue split for the different divisions so I can figure out what multiple they sold for and how likely that is to be repeated in the future.
First we do have a few quotes from recent reports.  In the tender they said, "Based on our confidence in the long-term outlook for our business and our desire to return capital to our stockholders, we determined to initiate the Offer in order to use a portion of the cash generated in the sale of Optometrics and EMF to purchase shares of our common stock from our stockholders." The 2021 letter noted, "For 2021, RMD’s products generated approximately $1.1 million in revenue. We are excited about some of the current and future product possibilities within RMD and the prospect does exist for this revenue stream to grow substantially but it is difficult to predict either timing or amount" (emphasis mine).  The RMD subsidiary does have a new president as of Apr 2022 and maybe he can drive that division to push out more products.
Given the 9months numbers from after the sale, they're on track to do $38m.  See my marked up spreadsheet below with my guesstimates in yellow.  The only things we know about divisional split in the huge 2021 year are a couple quotes from that report, "Performance for the fiscal year ended September 30, 2021 was at record levels across all divisions." and "RMD’s products generated approximately $1.1 million in revenue".
Here I'll assume the RMD growth was slight but not off the charts.  Call this one of the bookend assumptions since we know in 2021 all divisions had record highs so this would be around the low end of RMD growth.  Here we see optics revenue and gross margin growth was most of what drove the big 2021 year.  Maybe this makes sense if they were then able to sell and get a good price for 2 of the 4 optics divisions.  Based on this assumption they would have got about 2x sales.  If this whole company is worth 2x sales then the tender offer should be more like $6-$7.

Another assumption could be if RMD had higher growth.  This leaves us with a remaining company company that's more depended on RMD but again it looks like they got about 2x sales for the sold divisions.

I really wish I could follow the money but we just don't know what insiders will do.  It's kind of weird the company is buying back 8.0m shares when the insiders hold 7.99m.  They could end up owning the whole company alone or sell completely out.  The conspiracy theorist in me wants to believe the company is trying to dupe us into take the tender so they can keep the best parts of the company that are rocketing forward on the back of the 2021 rocket ship.  They sold off a portion for 2x sales so who's to say they can't do it again.
But maybe they just got an offer they couldn't refuse and the 2x sales multiple is unlikely to ever be seen again.  It would be abnormal for the company's private sale price to be like 6x the stock price.  And it's been a long time since the stock was this high. 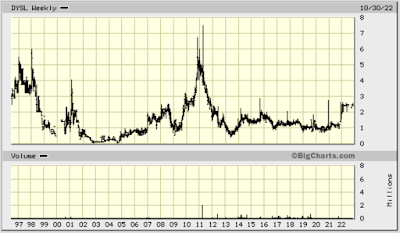 The question is what do we have left in DYSL and how likely are we to see a 2x sales multiple again.  Hard to say.  I'm not sure this exercise got me any closer to a decision.  I'll probably tender at least some.
--Dan
disclosure: long DYSL for now