Dynasil (DYSL) de-registered from the SEC a few weeks ago, moving from the NASDAQ to OTC Pink.  To file the de-reg they bought out all shareholders holding less than 8k shares for $1.15, dropping common outstanding by 16%.  The company estimates a $900k annual savings from not filing with the SEC yet market cap has dropped by 35% from the day before they announced their intention.  Seems like an overreaction to me.

DYSL is a technology company.  They push on R&D with an eye towards production. The latest 10-k notes 72 issued U.S. patents (up by 4 from the prior year) and 40 pending.  They operate in 3 business segments (from the 10-k):

Their single largest R&D project up until a year ago was Xcede.  They formed a JV with the Mayo clinic in 2013 to commercialize this tissue sealant patch.  Unfortunately it didn't work out with the company finally closing the division in July 2018.  You can see how pleased the market was in the chart. 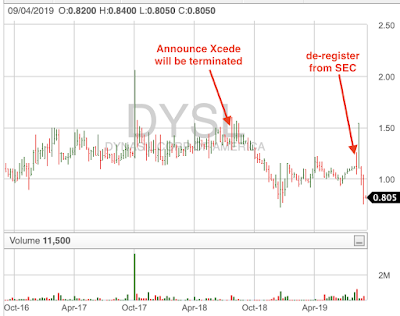 I excitedly bought up shares in Dec '18/Jan '19 following the big drop and I wasn't the only one.  The CEO bought ~2M shares at $1 in Dec 2018 over the course of a couple large transactions.  I saw the Xcede cancellation as a blessing in disguise because it was costing the company a million per year.  I bought in hoping the company would turn those savings into profit.

As the stock climbed back into the $1.20's I thought the gap would fill then the company announced their intention to de-register from the SEC.  Something I'm all too familiar with.  They estimate $900k annual savings so I can see their point of view.  I wish the SEC would give these small companies an option to stay reporting while saving money.  That put a stop to the stock rise pretty quickly.

The chart shows you just how the market feels about going dark.  I think this drop is a gift.  Apparently the CEO agrees as he bought 20k more shares just a few days ago.  With the de-registration we have forced selling by those who are not allowed to hold OTC or non-SEC reporting companies.  We have others deciding to get out because it's now a "risky dark stock".  The shareholder base is transitioning.

Now the stock trades on the OTC Pink Current Information tier but I'm not sure it'll stay.  We may end up with a stop sign and movement to the Limited Info tier.  I hope they keep communicating and they said they would, but I wouldn't hold my breath on quarterlies:

To accomplish the de-reg the company had to get below 300 shareholders "of-record" so they did a split and bought out all shareholders holding less than 8k shares for $1.15.  It was a reverse split then buyout then immediate forward split so in the end it amounted to a tender offer.  DYSL ended up buying back 2.8M shares, 16% of the common, for $3.2M.  Bank loan funded.

Financially I see the de-registration as a home run.  I thought it was a $2 stock beforehand so buying back 16% of the company at $1.15 is great.  And who can argue with saving $900k per year.

The chart below shows my main reason for being here.  This is their annual earnings for the past 8 years.  "net earnings" is from the 10-k as is "Xcede" earnings.  I add those together then subtract out their estimated de-reg savings and divide by the new share count.  I'm not saying this is exactly what the company will earn and this is not a projection.  This is potential.  We have a company that could have earned ~$0.20 per year for the past 5 years with the measures now in place.  And it's trading in the low $0.80's!

The icing on the cake is real estate.  DYSL owns 3 buildings.  Unfortunately the company does not have current appraisals for them so I did some digging myself.  I am no real estate expert so take my estimates as junk but at least it's something.  I just compared similar buildings for sale in the area.  I get $4.5M total real estate value = $0.30 per share.

That's fundamentals and it's fine but we have to consider the other half of the equation.  The stock market is all about perception and extrapolation.  Fortune telling.  Look at the chart.  How it dove down following Xcede's demise.  How it dropped after the SEC de-registration.  This is forced selling on top of people giving up.  The stock sits at support.  This is a buy point. 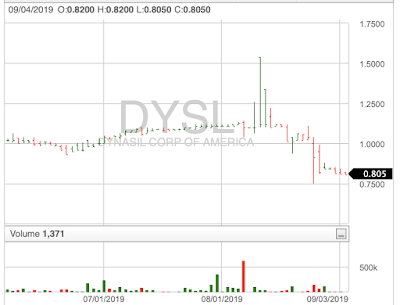 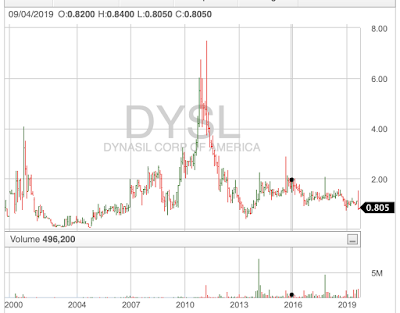 I don't see how the stock is worth less than a couple bucks and I think it'll recover to over $1 as the de-registration forced selling fades away.  I see potential for much more.  The products, divisions, and market is exciting.  This is one of those companies that could hit an R&D home run.  "Could" being the key word there...

Risk:
Let me leave you with the all important topic of risk.  Main one to me is the company never communicates again.  They say they will do annuals but who knows.  Or maybe they just don't know what they're doing, after all they spent years pursuing Xcede and nothing came of it.  Could be the de-registration selling is not done and the stock continues its fall.