If you have been a reader for a while you know of all the brokerage drama I've had.  It's all due to the tiny dark stocks I like and the industry moving against them.  I'm sure it doesn't make the brokerages any money so I understand.  I'm happy to report I have brokerages that work great for me.

The latest news is Penntrade has shut down so I transferred those accounts to Schwab.  I love Schwab.  I now use Fidelity, Schwab, and ETrade.  I hope this is my last brokerage related blog post...

You can read my broker mania here and let me just give a quick recap.  Years ago I used Fidelity for my 401k and it was all good until they blocked dark stocks in early 2016.  I had opened two accounts at Optionshouse in 2015.  They let me trade anything so I was great until they abruptly told me I had a month to get out.  I franticly searched for any brokerage to take my tiny dark OTCs in kind and only 2 of the 40 I contacted said they'd take my account transfers.  I went with T Rowe Price.  TRP was OK but soon I found two issues that bugged me with the main one being that I had to call in orders over 50k shares.  I then transferred to Penntrade.

Trouble at Penntrade started after only a few months as their clearing firmed caused them to stop online OTC trades in early 2017.  They also had higher fees of around $30 but I overlooked the issues since they would let me trade anything I wanted.  They always told me they were working on the online trading issue and I know they were a small boutique outfit so I let it be.  I always thought about transferring but had such issues getting in somewhere after Optionshouse I was in no rush.

A few weeks ago Penntrade forced my hand.  They've closed down.  See below for the message right now on their website.  I think Penntrade is the online trading platform of Paulson and RBC Correspondent services somehow is involved in the back end because my statements always said their name somewhere.  I don't know if Paulson is still around or what else RBC does. 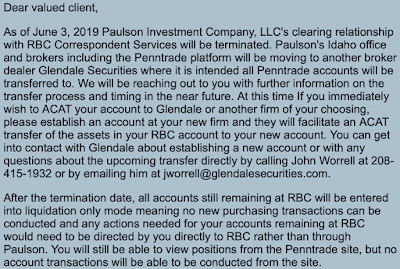 So I called Penntrade.  The guy was not happy with what was going on but I didn't get into the back story.  Main thing is all accounts were transferring to Glendale Securities, a full service firm with no online trading.  Right there I knew it was time to move.

In the mean time I had started using Schwab about a year ago when we sold our house.  I knew they would let me trade anything I wanted so that's where I opened up a brokerage account.  It's all online which is a major plus.  I'm a full time engineer and cannot be calling a broker all the time.

When I had contacted all those 40 brokerages in the fall of 2016 I was not certain Schwab would allow an account transfer with the tiny dark OTC stocks inside.  For whatever reason I couldn't get a clean answer from them.  Now that I needed to move I thought I'd try transferring into Schwab and cross my fingers.  IT WORKED!!  I was so relieved.  I moved 3 accounts and everything made it through.  We are still moving one because of missing some RBC form.  It'll go through in another few days.  Then I just need my wife to give me trading authority and we'll be back in business.

I am so relieved.  I hated calling in to Penntrade and it really decreased my activity.  I avoided it as much as possible.  I know have accounts at Fidelity, Schwab, and Etrade.

Fidelity
I have one account at Fidelity and it's really just because I didn't want to move it when I changed jobs last year.  Fidelity was the 401k provider at my last job so there it is.  I have their BrokerageLink option which lets me trade individual stocks.  I cannot trade dark stocks here.  I am actually very active in this account and it's has done well.  I love Fidelity's website.

When I started the new job last year I was not sure if my new company's 401k would have a BrokerageLink type option or if they'd only allow mutual funds.  I couldn't take that risk and was not super motivated so I stayed at Fidelity.

Etrade
This account I just got over the past year because I get some Restricted Stock Units (RSUs) at my new job.  These automatically flow into an Etrade account.  When I first got it I did test buys for HYDI and IOMT.  They went through so I stayed.  I have one after tax brokerage account here.  They let me trade anything and it's a cheap online broker.

Schwab
My wife and I will have 4 accounts here once this last transfer goes through.  I have a Roth IRA.  My wife has both a Roth and Traditional IRA.  And then we have a joint after tax Brokerage account.  They let me trade anything I want and it's super cheap.  I can do grey market, dark, penny stocks, OTC, whatever.

If anyone asks me for a recommendation lately I say Schwab.