I received new COMX and SIMA annual reports recently.  Both stocks are incredibly cheap.  Let me update you on the numbers.

I first wrote about COMX in Apr 2016 with the stock at about $1.60.  Now the stock is $2 and maybe cheaper than it was.  If you don't know the story I'd encourage you to read my original post.  I see two main issues with COMX: one they are dark so no one knows any of this and two most of their sales and cash are in the UK.  I don't know what the company plans to do with the current and future cash.  Maybe I'll try contacting them.

In short, COMX had an outstanding year with sales up 13% and earnings up 44%.  Actually they've had an outstanding past few years.  COMX paid off their long term debt in 2015 so a half million went into earnings and cash that otherwise wouldn't have.  I hope they keep it going.  See below for the numbers: 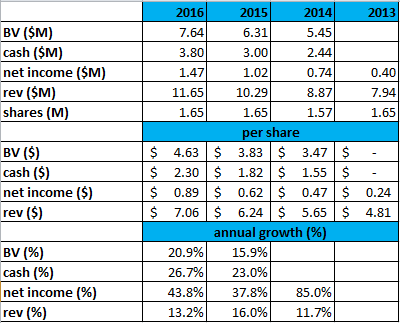 I first wrote about SIMA in Sept 2016 with the stock at $0.65.  Now the stock is $2.75 and still super cheap.  Again please read my original post for the back story.  The company is dark

A few weeks ago I sent a letter to the SIMA board reminding them of their fiduciary duty to do what's in shareholders' best interest.  I told them I think it's time they put the cash to use and buy out all minority shareholders at a fair price (my suggestion $12).  I received a call back from a lawyer representing the company.  He said the board has discussed my letter; they are aware of the large cash balance and are evaluating their options.  He said the company is private and they think they've done the right thing in being private to avoid the fees of a public company, and he doesn't think the company would get a good multiple in the public markets with little growth.  He said if the company is sold shareholders will benefit from the large cash balance in the form of increased purchase price.  One possibility he mentioned a few times was doing a tender offer.  I did not push the fiduciary duty of a board that lets the stock sit at such a low valuation.  I should email him again to make sure they are considering a special dividend.  He could not give any time table on when the board may act but at least it sounds like they're moving somewhere.  Fingers crossed...

On the year SIMA did well.  Pretty much the same as they have been doing recently: flat revenue and a couple more million in the bank.  Numbers below: 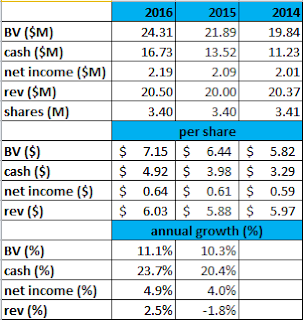 Even with the increased share price since my last post this stock is very cheap.  We have a stable company with flat revenue earning about $0.60.  Strong balance sheet with no debt.  Currently trading at 0.6x cash, 0.4x book, 4.3x earnings.  The stock is at $2.75 and I'll go with a value around $10-12.