The Dark and Cashy Trio of ADDC, COMX, SIMA

Let me give you update on ADDC, COMX, and SIMA.  I don't know who else is talking about these stocks and the companies don't communicate with the public so if I don't give out their numbers the world will never know.  I have these three filed under "maybe they'll do something with the cash someday."

Other than updated numbers I don't have much to add to my previous posts: ADDC, COMX, SIMA.  If you want any reports just send me an email.

ADDC:
ADDC makes printers and printer components.  Been in business forever and mostly owned by the Clary family.  The company owns 50.15% of Clary Corp so their financials are consolidated which muddies the waters a bit.  I don't know how much of the cash belongs to us ADDC shareholders.  ADDC holds an annual meeting, sends an annual report to shareholders, and pays a dividend.  What they do not do is release any info to the public.

I was not able to make the annual meeting this year but a friend was there.  Their legacy bank printer business continues on.  Traffic and military UPS systems are doing fine.  The big focus and growth potential is the pharmaceutical printer they've been working on the past few years.  They are making inroads but the lead time could be long.

The numbers are below and I say value is maybe $25-30.  It depends on the cash split with Clary and the real estate.  Latest price is around $18 so it continues to be cheap and who knows if that'll ever change.  I hope the pharmaceutical printer goes well.  The cash numbers below are really cash + investments and like I said, some of that is split with Clary. 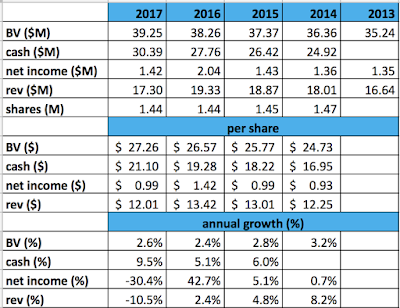 COMX:
COMX sells point of sale systems and most of their business is in the UK (which unfortunately means most of their cash is in the UK).  The UK subsidiary files public reports every year here.  The parent company here in the US sends an annual report to shareholders and that's about it.  I don't know why they don't communicate more and I haven't asked.  I can only pester so many companies before I get tired.

One interesting tidbit on COMX that I don't think I've mentioned in prior blog posts is their stock & cash purchase of Mission Integrated Systems in 2014.  The CEO tells me they valued the COMX stock at $5.85 for the transaction.  At the time COMX had cash of $1.55 per share,
revenue of $5.65, book value of $3.47, and earnings of $0.47 so $5.85 is still probably too cheap but the stock was trading at just over a buck so it's probably OK.  In any case it goes to show you how cheap the stock is now at $5.10.

See below for numbers.  The incredible growth slowed down this year but that was bound to happen.  I'd value this one around $10. 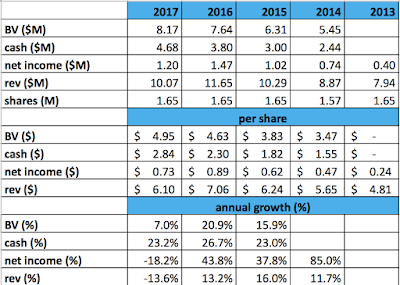 SIMA:
And now to SIMA who, like ADDC, will send out a paper annual report and nothing else.  How archaic...but at least it gives me a chance to read something away from a screen once in a while.

SIMA is the most exciting business of these three.  They make ultrasonic plastic welding equipment and I think they've been pretty cutting edge over the years.  If only they would tell the public.

Numbers below.  Cash here is really cash + marketable securities.  The stock sits at $4 and I'll go with an $11 valuation. 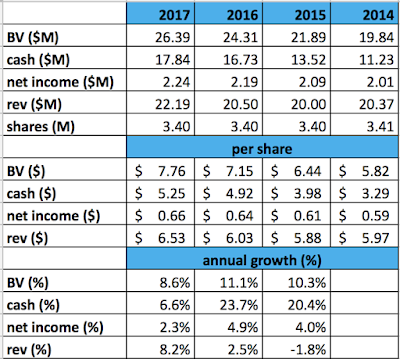