Biomerica (BMRA) is a small developer of medical test equipment. They are working on FDA approval of their new product, InFoods, and describe it as a “multi billion dollar market opportunity.” With a market cap of $22M BMRA is in for big things if all goes as planned.


BMRA is one of a number of companies I own having a sort of flat, reliable side of the business paired with a high potential growth new product. GIGA is like that as was SOFT before selling off their PLM business. BMRA is farther along in the process but it’s the same idea. The long term BMRA chart below is a textbook example of why I buy the stocks I do. The quiet period at all time lows is the time to buy. When I talk about EKCS, SOFT, IOMT, or MRCR being a winner down the road if they can only stay in business this is what I mean. You can see investors losing hope and selling out. You can imagine people reading filings thinking this company is just awaiting bankruptcy, they deserve a discount to book value. Yet BMRA survived and here we are. 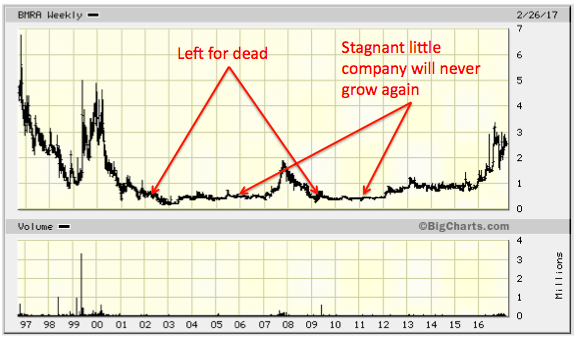 The high potential product for BMRA is InFoods, an Irritable Bowel Syndrome (IBS) diagnostic device. Plainly, InFoods is a game changer. I’ll discuss further below but let me just throw out some stats. IBS has 3 forms: IBS-C (constipation), IBS-D (diarrhea), IBS-M (mixed). Current available treatment involves taking pills to ease the symptoms while removing foods from the diet in an attempt to get at the cause. All available drugs target either IBS-C or IBS-D, there is nothing for IBS-M and nothing for all 3. Food removal is a problem because they have nothing to guide the process and this is where InFoods comes in. InFoods is a finger prick blood test, with no side effects, that directly tells the doctor which food(s) to eliminate. So for example with InFoods the patient may have to remove 5 foods whereas with the previous shotgun approach it'd be 50. And InFoods works for all 3 forms of IBS: C, D, M.  According to BMRA IBS affects 45 million Americans and 10-15% of people worldwide with IBS sufferers visiting their doctor 3x more often and having 74% higher medical costs.

BMRA is more well known than many I follow. They are a fully reporting NASDAQ company. Seeking Alpha has some articles. Zacks has some great articles going very in depth that I recommend you read: here and here. I don’t have much more to say about it than Zacks but maybe have a different perspective and there have been a number of interesting points to the story so let’s just run through it.

Legacy Business
InFoods is not yet FDA approved so provides no operating revenue. BMRA has other products keeping the company going. Here are numbers from the latest 10k:

I say the legacy business is worth maybe $0.75- $1. Main things to notice are the clean balance sheet, clean share structure, and low-ish share count.  I wish the share count wasn't increasing but what can you do. That's about as much thought as I've given the legacy business. If revenue increases it will fall straight to the bottom line

Valuation
I have no valuation on this stock and I don’t see how one can put an accurate price on it. The potential of InFoods is monstrous relative to the current market cap so you have this binary event that will set the value range. Downside value is the legacy business $0.75-$1 range. Downside for the stock is probably the $0.50 support area. Upside is huge. You do the math


I will understand if you don't buy this one as the price has run up a lot over the past year and a half. I still think it's a buy and have bought at higher prices. Though the chart has come up so has the likelihood InFoods will work out but it's not the cheap buy it was at $1.

InFoods
I had a call with the CEO recently and the main two takeaways are he is very impressive and he is going for world domination. BMRA is currently working with the FDA to determine a path forward on approval. The most recent 10Q notes the company has "entered into a Clinical Trial Agreement with a major U.S. university to start the clinical trials for a gastrointestinal product that the Company is developing." BMRA has added to their Scientific Advisory Board to help guide through the FDA approval process. BMRA has put together a Strategic Advisory Board to give direction on the best business path to take with InFoods. They have already signed their first licensing deal and have 17 patents pending on InFoods.

To get an good explanation of IBS and how InFoods can fit into the market I suggest you read the above mentioned Zacks articles as well as the following from BMRA:


Healthcare costs are a primary concern with IBS patients as their continued search for a solution results in approximately $30 billion worth of direct and indirect costs within the U.S. alone.

Although not life-threatening, IBS is a serious health issue that can significantly impact quality of life for those who are susceptible. In the latest survey conducted by the American Gastroenterological Association, patients reported that they would give up caffeine, their cell phone or internet access, and even sex for one month for the chance to live IBS-symptom free for a month.

Biomerica's product (InFoods IBS), is a simple blood test that identifies the body's reactions to specific foods, as opposed to food groups, allowing medical staff to provide therapeutic guidance on which foods should be removed from a patient's diet to alleviate symptoms. This approach is intended to address all three forms of IBS and focuses on food, one possible underlying cause for symptoms.

A billable CPT code that can be used by both clinical labs and physicians' offices is available for InFoods diagnostic products. The InFoods product is unique in that it has no drug type side effects.

A timeline of InFoods related development at BMRA:
Next Steps and Conclusion
The CEO told me they are working with the FDA right now to figure out how to proceed.  BMRA is trailblazing here so the FDA has no precedent on how to do the clinical trial.  He hopes to announce a clinical trial "very soon" but has been saying that for a while.  Their investor presentation notes a timeline as such: 1 year clinical trial + 4 months FDA submission before approval.  That would put FDA approval in mid 2018.  The CEO said it has taken longer than he had hoped to get to this point but when you're doing something no one else has done it will take time.

He could not say enough about the recent additions to their various boards.  He even said two of their scientific advisory board members are on the FDA committee.  Zacks also talks very highly of the board members.  I don't know anything about them other than reading their impressive sounding bios.  They are certainly focused on the GI and IBS space.

BMRA's goal is to get a big licensing deal in place before the FDA approval comes.  They are keeping their options open but it sounded like the CEO would prefer one big licensing deal.  He said they could do many smaller ones but he does not want to box himself out of a larger worldwide deal.  He talked like Celtis was a small time deal.  In the end BMRA will probably end up manufacturing the product then selling at a markup in a similar way as the Celtis deal describes.

BMRA is pursuing two forms of the InFoods product: a lab use only unit and a doctor office unit.  The most recent 10k notes "A point-of-care product is being developed to allow physicians to perform the test in-office using a finger stick blood sample and could provide new incremental revenues to a GI medical practice. A billable CPT code that can be used by both clinical labs and physicians’ offices is available for InFoods® diagnostic products. The clinical lab product will be the first product we plan to submit for regulatory clearance."  BMRA is pursuing the lab unit first because the FDA could not handle a doctor office unit yet.  It's just too much change so they are starting with the easier to swallow lab unit.  The doctor office unit is BMRA's preferred product but it sounds like it'll have to wait until the lab unit is at least further along.  The CEO said it all depends on what sort of licensing deals they get.

The most recent 10Q also notes the BOD has authorized the company to pursue an S-3 shelf registration which opens the door to sell stock at some point.  I asked the CEO about this and he said they do not need any money now and he plans to finance any required expansion with licensing deal money.  But the shelf will be there just in case.

So there you have it.  BMRA is pushing forward hard on InFoods.  The opportunity is massive.  I will leave it to you to decide how likely it is to work out.

P.S. Sorry about the rhymey title.  Couldn’t help myself.  I am a dad after all…