Electronic Control Security, Inc (EKCS) is a tiny entry control and perimeter security solution provider.  Arthur Barchenko, 83, founded the company in 1976 and is still CEO; he owns 47% of the company along with his wife.  With a market cap of ~$250k, this is a story of potential.

EKCS is losing money and has negative book value.  Revenue is about a quarter of what it was 4 years ago.  The company has deregistered from the SEC in an attempt to save money.  So why would I buy shares in this company you ask?!  Well they also have won government contracts with a ceiling of around $300M.  As with all things there is good and bad, potential and reality, multiple courses which can be traveled... let's go through the facts so you can decide which way they're headed.

For the impatient folks out there let's start off with some stats:

Geez those are some ugly numbers.  They are losing money while revenue has been dropping.  Only help from insiders is keeping them afloat.  The $2.3M due to officers is unpaid salaries.  Common stock price has sunk accordingly, see below for the 5, 10, 15 year charts: 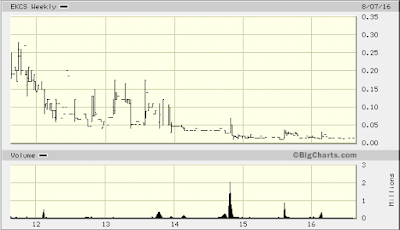 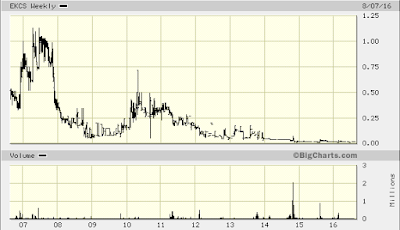 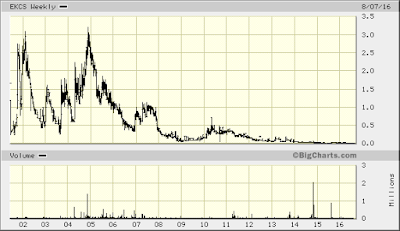 Man what a nose dive.  But then again what potential.

For a description of what they do, let's just read from the most recent 10k:

We work closely with architects, engineers, systems integrators, construction managers and owners in the development and design of security monitoring and control systems that will afford a normative but secure environment for management, staff and visitors. To support such efforts, ECSI’s team of key personnel are technically accomplished and fully familiar with advances in planning, programming and designing systems utilizing standard peripheral components, mini/micro architecture, user friendly software/firmware selection and application.

Problem is they haven't filed anything since Sept 2015.  I asked the company about this and they say they've fallen behind because the CFO has been out for his wife's illness.  They plan to catch up on otcmarkets with quarterlies as soon as possible including the 2015 annual.  I don't know if they plan to file with the SEC again.

Cons:
Too much debt.  Too many shares.  Have preferred outstanding.  Revenue dropping like a rock.

Some of their accounts receivable will be vanishing.  EKCS filed a lawsuit in 2012 for $1M against Lockheed for "breach of contract and tortious interference."  In 2013 the suit was moved from NJ to Maryland and EKCS stopped pursuing because it cost too much. EKCS has been carrying expected damages in their accounts receivable, stating they will resume litigation when they can. I asked management about this and was told they will not be pursuing due to the significant costs involved. They've decided to "write off our loss and move on to more profitable opportunities."

And the debt is growing.  The Pref B shares are accumulating unpaid dividends of about $0.2M annually.  Plus the current liability due to officers, shareholders and affiliates grows by ~$0.4M per year in unpaid salary.

Pros:
Huge Government Contracts
This may be more of a potential pro. The 2012 10k mentions a number of large contracts.  There were two 5 year multi-million dollar contracts from the Dept of Defense (SPAWAR) in May & July 2012.  There was a $7.8M Navy contract including a 5 year period of performance in Oct 2012.  In Feb 2013 they were awarded a Navy contract with a ceiling of $250M over 5 years of which they anticipated capturing 10% = $25M.  The 10k notes they submitted proposals to the DoD for power plants totaling $163M and had been awarded contracts with an approximate value of $35M over 5 years.  There's a GSA contract good through July 2014 renewable year to year.

These are really large contracts yet revenue has been around $600k the past couple of years.  I asked management about these contracts and they are all currently active but have not generated revenue. The government has not issued funded task orders for any physical security.

I wish I had an idea of how likely it is the government acts on the contracts but I don't.  If they do, revenue will jump through the roof.

Backlog
In Aug 2015, when the company announced they'd be filing again with otcmarkets, they disclosed $7.1M total from "current product backlog and our 'Bid to Build' proposals" which is "based on committed contracts and firm product proposals."  I cannot put much faith in a backlog full of proposals but it speaks to potential.

I asked management how much of this was committed contracts and they said, "Although the Government issued contracts on five programs valued as part of the $7.1m backlog, they have not issued funded task orders on any involving physical security."  Perhaps this $7.1M is the portion of that $300M contract ceiling they feel most confident on.

Recent Operations
In Feb 2016 EKCS announced a $250k contract. A couple weeks later they announced a $55k contract. Then in Jul there was one for $500k.  These are firm committed contracts from a company with annual revenue of ~$600k the past two years.

In my discussion with management they said total orders shipped during FY15 was approximately $700k. And the "current product, shippable and billable back log is $750k."  They expect to get through this 750k backlog within the next 6 months.

What does the future hold:
As always we just don't know.  For this one I have a hard time putting a value on the company so I'm looking at upside vs downside potential.  Just look at those charts above for upside potential while thinking of the $300M ceiling in contracts they have.  I like the industry they are in.  They have an old CEO who may want to sell the company at some point.  The company has survived 40 years and if you think they'll continue on then I say it's a buy.

As far as being dark they are better than many.  There's a reason they deregistered.  A year later they caught back up.  They have been falling behind again but have a reason.  I'm told they'll catch up and have no reason to not believe them.

I know there's risk.  Revenue has been dropping and they have too much debt.  They can't go on forever with no salary.  Maybe the company will go bankrupt.  But we know revenue will be up with the next annual report at ~$700k vs ~$600k.  And we know next year it'll be at least $750k.  So it seems the downtrend is at least flat for the near future.